There are few activities in the garden that I enjoy more than digging potatoes. This is not to say that I don’t also love planting, weeding and hilling potatoes, but more than anything, I love the final potato harvest in October.  This year, rather than a golden autumn day, it was rather cool, frosty almost.  I had put rugs and carpets down over the beds because the weather had turned unexpectedly nasty, and an early snow delayed our getting the potatoes up.  While the snow was short lived, we know it will return again soon enough.

It is time for everything to come in from the garden.  Now that the potatoes and carrots have been dug, all that remains are a few leaves of swiss chard and some purple kohlrabi that had not had time enough to form their bulb.  The hardy leaves will not go to waste though.

No matter how careful the potato digger is, there are always a few pierced or bruised by the potato fork.  We picked through the potatoes, brushing off clusters of mud, reserving the punctured ones for our lunch. 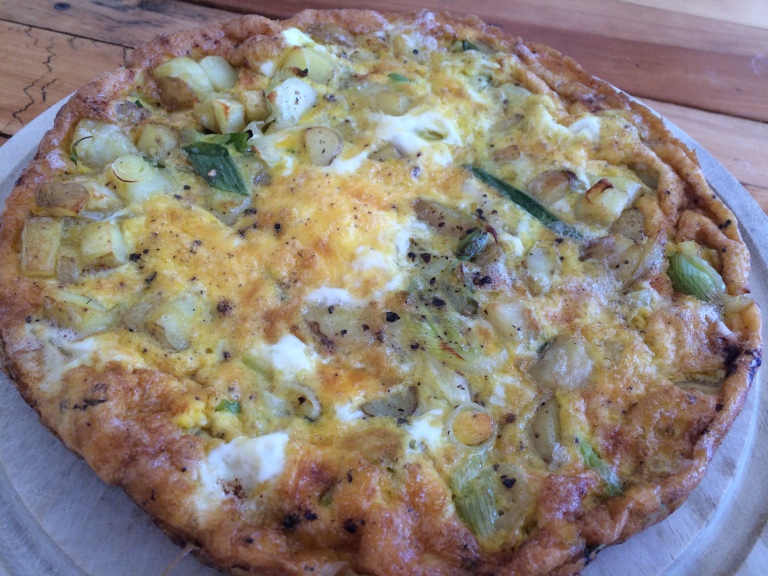 Almost every good cookbook has a variation of this potato and onion omelette of Spanish origin.  The trick is good waxy potatoes, an almost equal proportion of onion, and a bolstering tip of olive oil.  It shouldn’t be taken for granted that eggs from free run chickens, with their orange and richly flavour yolk, are also essential.

For a 9 inch cast iron fry pan, cub (half-inch dice) enough potatoes to scatter evenly in one layer over the bottom.  Prior to adding the potatoes, heat a generous quarter cup of olive oil.  Fry the potatoes turning occasionally to brown nicely on all sides.  They should be soft in the middle, and are done when you have the urge to eat them straight from the searing hot pan.  Sometime before the potatoes are fully cooked, add 1 good-sized sliced onion (or one bunch of green onions) to the pan.  The onions are done when they they soften and become translucent.  Season well with grey sea salt and a generous grinding of pepper.  Meanwhile beat 6 eggs with salt and pepper.  Pour over the potato and onion and leave over the burner for a few minutes.  Then turn off the burner and place the omelette in a 400 F oven until it puffs nicely and is cooked through (10 minutes or so).  I sometimes finish under the broiler to ensure the top has a nice colour.  The more traditional method is to cook the omelette on the stove top, flipping it onto a plate and then back into the pan, to cook the top side.  This seems far too theatrical and dangerous for me, and I am happy to take the easy road by way of the oven.

Four humble ingredients, treated with care, are transformed into something truly satisfying.  I can think of no better way to celebrate the season’s potato harvest.