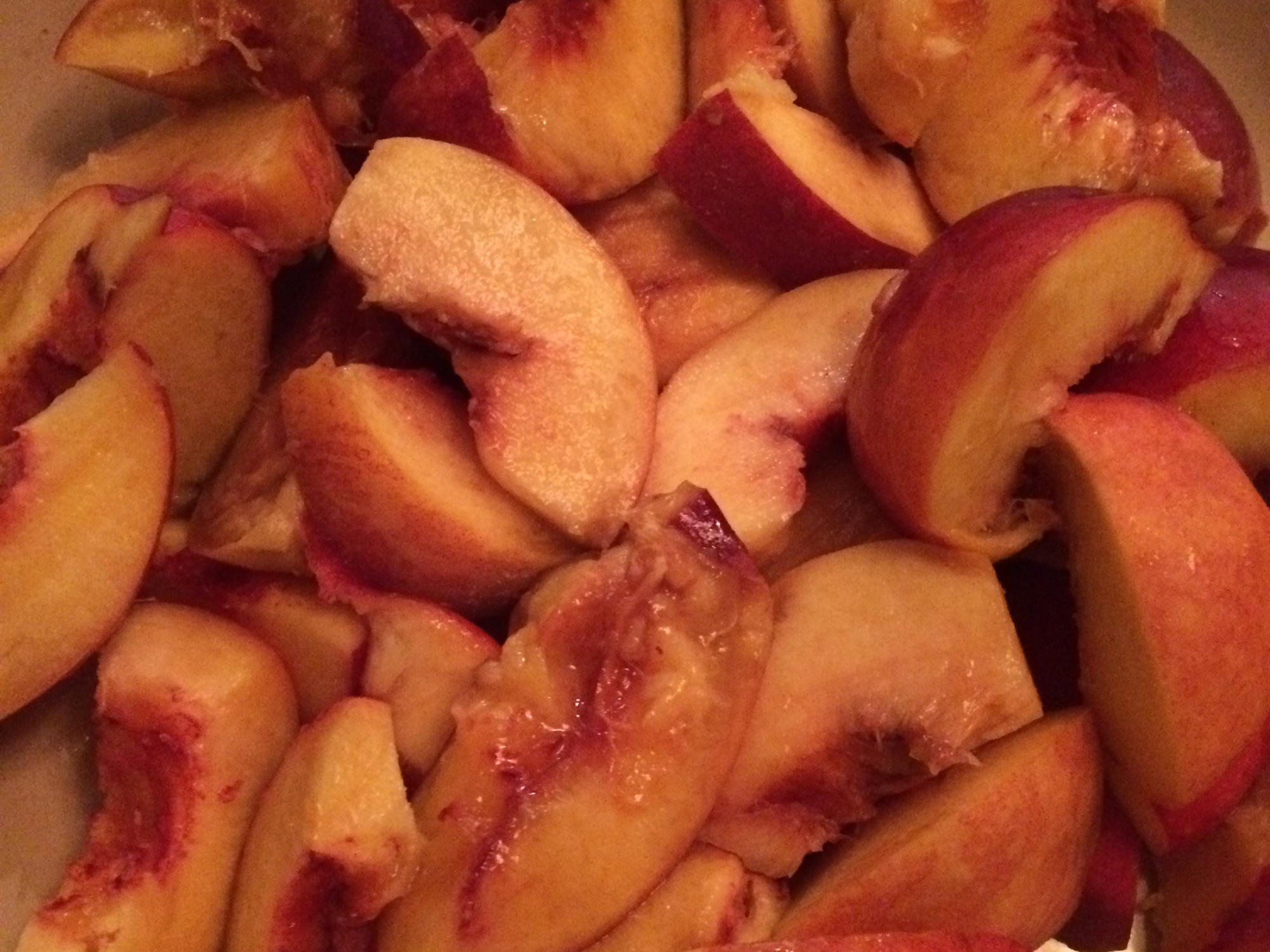 I frequent a garden produce stand that keeps a very good sale rack, filled with fruit and veg at the edge of its ripeness.  Some of it is bruised.  Sometimes it is simply misshapen or nicked in a way that makes it less likely to sell at its full price.  The other day I picked up two baskets of peaches (and a few nectarines thrown in for good measure) for $1.80.  At its full price I would have paid a hefty sum for this amount of produce.  Some of the fruit was badly bruised and some was ripened past reasonable usefulness. Catching fruit on a bargain like this, is only a deal if you can use it the same day.  I feel good about the idea of taking something that may have been thrown away and giving it, instead, new life.

Because the fruit was so ripe I decided it would best be cooked.  I could have halted its ripening by slicing it and poaching it in a simple syrup flavoured with ginger, a cinnamon stick, a twig of rosemary, or a peel of lemon.  This would rest over in the refrigerator and be very good with yoghurt for breakfast, or over ice-cream, or even better over L.J’s Vanilla Yoghurt Panna Cotta.  Instead, I decided on a Peach Cobbler.

Peach Cobbler can be made many different ways.  Some recipes seem to me to be needlessly complicated.  My method is simply a stewed fruit with good rich scones baked on top.

Stone and quarter the peaches and toss the fruit with raw cane sugar in a shallow cast iron pan.  You could add vanilla or lemon, or add many creative flavour combinations, but sometimes I like to keep thinks straightforward (dare I say eatable?).  The fruit is put into a 375 F oven until it starts to bubble, but is not cooked through 10 or 15 minutes.

While the fruit is in the oven I made the scone dough outlined below for the cobbler topping.  The scones are shaped and placed on top of the hot fruit, not quit touching – about an inch apart.  Then the pan is placed back into the oven for half an hour, or until the juices are bubbling and staining the dough with their pleasant crimson colour. 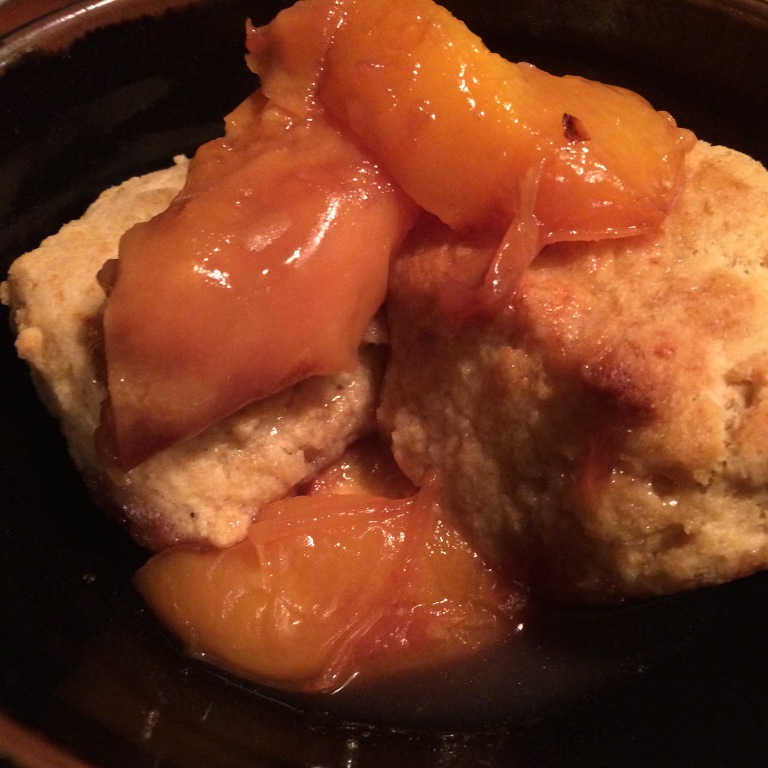 So much can be done quickly in the kitchen if you have some reliable basic recipes memorized to which you can turn to again and again, modifying and adapting as necessary.  One such recipe is my Grandmother in-laws rich tea biscuits.  I found this when my mother-in-law showed me an old Blue Ribbon Cookbook that had many loose pages of notes and clippings stuffed inside by her mother.  One of the notes was for this recipe, which E. Varga made often during the harvest when the threshing crew was hard at work.  These would be taken out with fresh jam at mid-morning to the field.  And very good they are.

Sift flour and baking powder.  Cut in butter and rub through flour.  Mix in salt.  Beat egg into the milk and work into the flour quickly to form a dough.  Work dough just until it forms, being careful not to overwork.  Add more milk or flour if necessary.  The dough should be soft and fairly wet, but not sticky.  I play around with the moisture content depending on how they will be used.  For instance I used a few extra tablespoons of milk for the cobbler above.  Roll the dough into a square about 1 1/2 inches thick and cut into 12 or 16 squares.  Shape into biscuits and place on oven tray.  Bake approximately 12 minutes at 375F or until nicely browned on top.  Or, instead of baking them separately place them on top of fruit as above, or on top of a vegetable or meat stew as a dumpling.

I modify this by changing the flour types, adding cornmeal and corn kernels for corn biscuits, or by adding 1/2 cup of shredded sharp white cheddar or pecorino romano.

Often I make these last-minute, especially if a friend asks if we can stop along the way to bring bread to a shared meal.  These are much more satisfying than most bought bread, and if you have used really good flour (whole grain with the wheat germ still intact) and whole milk along with a good organic egg, they can be quite healthy for anyone who is not gluten or dairy sensitive (though not low fat).  If no one has ever said a scone could be healthy before, then let me be the first.  Demonizing food will not get anyone healthier.  In fact this could be adjusted to be dairy free by adding olive oil instead of butter and a milk replacement of your choice.  I am confident they would turn out well.

Having a handful of stock recipes that can be modified and adjusted to accommodate whatever direction your kitchen takes you can take a considerable amount of pressure off.  Though, free-handing supper does require a base of good methodologies and memorized ratios to begin with, and this is a good one to start with.