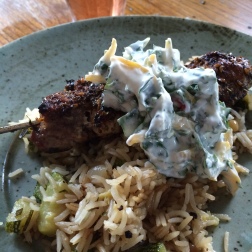 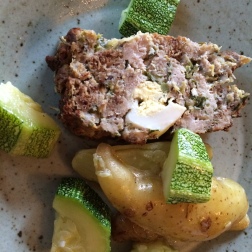 Autumn seems to be rushing in.  The leaves are turning, the birds are making their preparations, the weather has cooled, and the garden has slumped in exhaustion.  Soon it will be time to clear the garden beds of the remaining kohlrabi, broad beans, and tomatoes.  Then the potatoes will be ready to be dug.  The carrots will follow and I will turn over the soil in preparation for spring.  I love this time of year and working in the crisp autumn air.

This crisp autumn air also changes our appetite.  Our meals have taken on a deeper hue; the flavours are more robust, the woody tough herbs are coming into their own, and the colours are shifting from summery shades to deeper tones.

We grow a fingerling potato that is long and tubular, and has a waxy fudgy texture.  They are not “new” any more in that their flavour is less vivid than when we plucked them from the soil in July.  They are settling into a richer buttery flavour that will last through the winter.  These potatoes have featured in a number of recent meals.

Here are a few highlights.

Google hasselback potatoes and you will find many examples.  The idea is to slice thin strips two-thirds of the way through the potato so that you get a combination of french fry, roasted potatoes, and fluffy baked potato.  Often larger potatoes are suggested, but I prefer a waxy small fingerling.  A good idea is to place a chop stick on either side of the potato so that your knife does not slice right through.  I don’t bother with this and wing it in a careful, but cavalier, way.  It is just supper after all, not an engineering project.  A good sharp knife does help achieve nice thin slices.

The potatoes were tossed in a cast iron dish along with some free range organic chicken legs.  I drizzled everything liberally with olive oil and scattered over a generous amount of finely chopped garlic, rosemary and thyme.  Some crushed fennel seed would have been nice too.  This herb mixture should be worked liberally into all the crevasses of the potatoes and I also scored the chicken pieces so that the herbs and garlic would penetrate and flavour the meat.   Ensure the chicken is well coated with the herb mixture and you will achieve a nicely crusted bronzed chicken leg.   A good squeeze of lemon, and then into a hot oven until everything is caramelized and humming.

I served this with a fennel salad.  I finely sliced a fennel bulb from my garden, as well as a small handful of the fennel fronds and dressed it with olive oil, grey sea salt, a grinding of black pepper and squirt of lemon.  Having a fresh crunchy salad alongside the aromatic roasted chicken and potatoes brought levity to the meal. 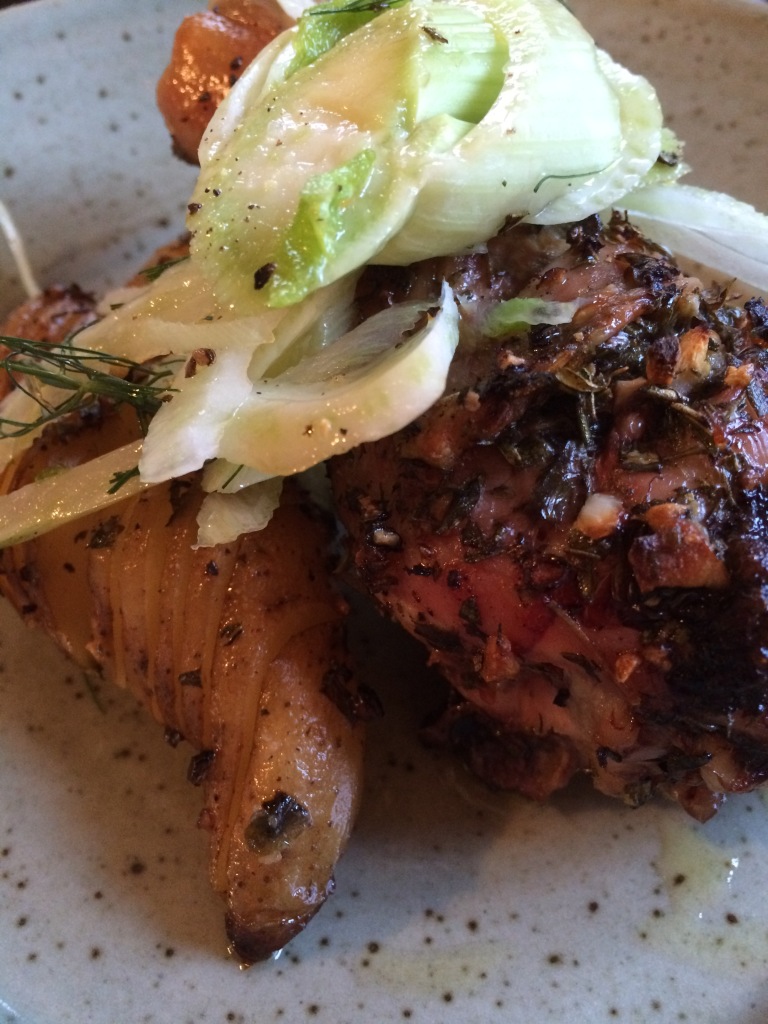 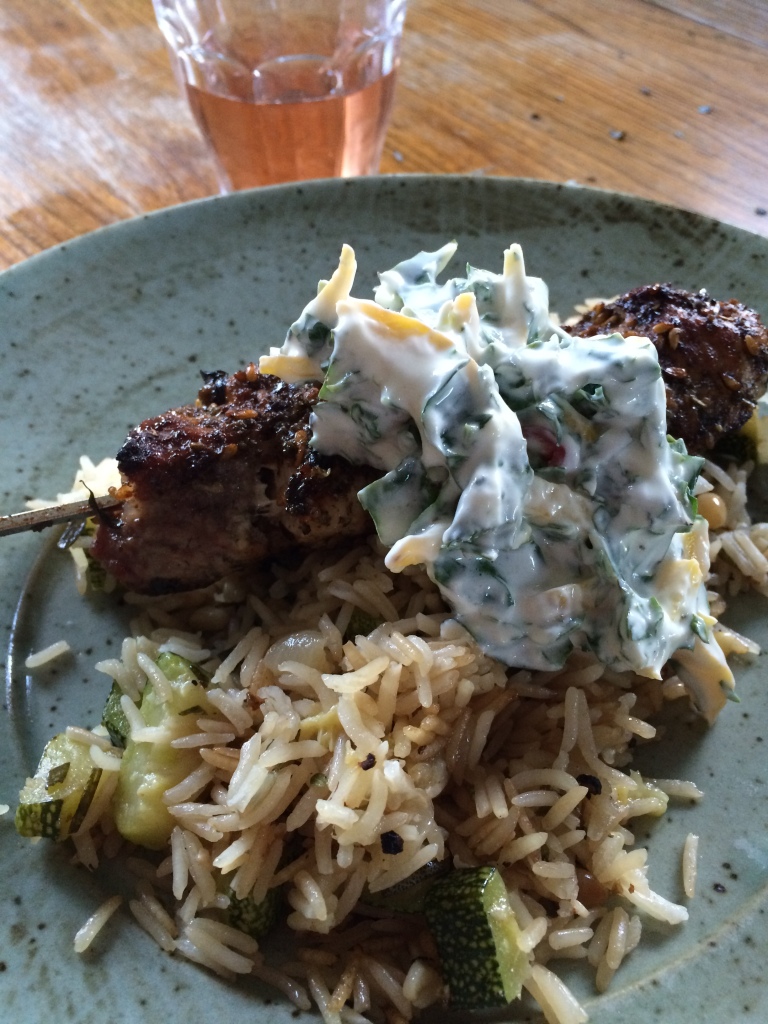 We ate this the last night at our lovely rental cottage near Riding Mountain National Park, a place where every meal was made better by the good clear air and lovely views.

Cubes of pork loin were marinated in a mixture of good herbs such as rosemary, thyme, golden oregano, lemon, pepper, salt and olive oil.  These were grilled until crusty and browned, and still juicy inside.

A pilaf came together by frying an onion in a good plug of olive oil, then I tipped in pine nuts and garlic, and a teacup full of basmati rice.  Then a heaped handful of cubed zucchini.  A teacup and a half of water was added.  The rice was brought to the boil and turned off to steam for 20 minutes.

To serve with this I made carrot tzatziki .  I grated a carrot (typically cucumber would be used, but I didn’t have any due to a tragic accident.  A story I don’t have room to explain here), and loads of fresh chopped herbs.  Dill alone would have been enough, but I also used parsley, fennel fronds, and golden oregano.  A bit of fresh garlic was added, and a good drizzle of olive oil and pepper and salt.

The carrot tzatziki made this dish.

The meatloaf was adapted from At Elizabeth David’s Table.  My method was to take a half pound of ground chicken and mix into it a handful of chopped parsley, salt, pepper, and a minced onion.  This was pressed into a greased loaf tin.  Once in the tin I opened up a trench in order to stuff the centre of the meatloaf  with a chopped hard boiled egg, some chopped prosciutto, and grated pecorino romano.  The meatloaf was pressed over top to seal the stuffing.  The loaf was baked for 30-40 minutes at 350 F until nicely browned.  We ate this chilled on a picnic with green beans al a greque (method taken from A Virgin Territory) and then a few days later cold alongside the potato and zucchini stew outlined below.

The potato and zucchini stew is loosely adapted from a method I have read about in a number of Italian cookbooks.  The zucchini and potatoes were tossed in a cast iron pot with a generous amount of chopped rosemary and garlic, a bay leaf, grey sea salt and cracked pepper and equal parts water and olive oil were added. (not so much to cover the vegetables, just enough to help things steam and become lovely – say a quarter cup of each for two cups of vegetables).  The lid is clamped on and this is simmered slowly just until the vegetables are tender.  Much of the water should be absorbed by the vegetables and the remaining liquid should be a gorgeous pool of olive oil.  If your zucchini is watery you might need to add less water, so pay attention to your produce!  It will tell you what to do.  This should rest a while on the back of the stove while you have a lingering pre-dinner drink, chase a child, or prepare what else there is to eat.  Though, to be honest, there have been previous summers where a dish like this, of potatoes and whatever veg is at hand (often runner beans), is all we have for a pleasing light supper at our summer house at the farm. 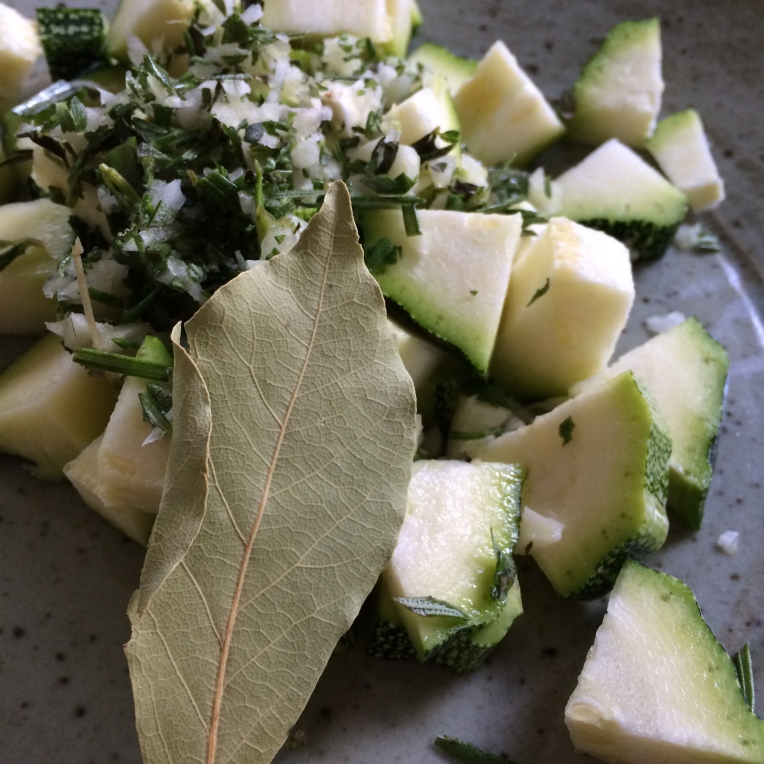 For me, the subtle shift from summer to autumn eating should be a gentle transition.  There are some remainders of summer produce around, and the beginnings of autumn vegetables are appearing.

It is easier to face the end of summer by holding onto some of the lighter eating and freshness of the season, while also shifting to slower cooking, and satisfying, warming meals.  Striking such an intentional balance is easiest achieved by harvesting your own vegetables or spending time at your local farmers market.  Through enjoying what is seasonal and local we can experience the “micro-season” between August’s high summer and October’s autumn.